The Hyperice Hypervolt is demonstrably great in many ways. So great in fact, thousands of knock offs have followed suit, saturating the market since its release in early 2018. As the saying goes, imitation is the sincerest form of flattery. That said, a good massage gun is not only one that receives high marks for initial quality, but long-term reliability as well.

Contents show
1 Is the Hypervolt worth buying?
2 The Hypervolt Hyperice: How does it hold up after a year of abuse?
3 Should you buy it?

After one year of ownership, here’s what you probably want to know about the Hyperice Hypervolt:

Is the Hypervolt worth buying?

Answering that question is a bit of a double edged sword. On the one hand there’s the value proposition. The Hypervolt does deliver on every level as promised. It produces an insane amount of percussive massage power, has great battery life, and just reliably works.

On the other hand, there’s the price. Why would anyone willingly spend $300+ dollars for a massage gun, when a look-alike alternative promises the same experience at half the cost?

That’s an excellent question we attempted to answer when we compared the Hypervolt vs. the opove M3 Pro.

Our conclusion: When you buy a Hyperice Hypervolt, you’re buying more than just a name. As we said before, we’ve had our Hypervolt in full-time, daily service for well over a year now and it still outperforms every generic massage gun out there. No contest.

The Hypervolt Hyperice: How does it hold up after a year of abuse?

Our favorite aspect of reviewing massage guns is the unboxing. While there’s little that surprises us anymore, there’s still an exciting element to unwrapping a shiny new toy. This massage gun was no different.

When we first fired up the Hypervolt, it was smooth and shockingly quiet. The shear pulverizing power of the brushless motor was astounding. Sweet relief, it was amazing.

After a year of use and abuse, our Hypervolt may be starting to show signs of aging, but it is still 100% operational.

Despite the scratched and scuffed exterior, it’s as solid as ever. No loose attachments. No cracks in the body. No odd burning smells from the motor. The battery still holds a great charge. In reality, we have absolutely zero complaints so far.

Your mileage may vary, but for us, we can confidently say that our Hypervolt has been a workhorse.

There’s no question, the Hyperice Hypervolt does have some pretty stiff competition. Differentiating one massage gun from another is a major challenge and of course you don’t want to be left with buyer’s remorse.

So here’s our take: If the Hypervolt is something you’ve come to want, save yourself the mental headaches and get it already.

At this point, we’ll assume as the consumer you’ve already done your own research. You realize the competition is pretty fierce but you’re wanting the very best.

If that’s the case, done, buy it now. You’ll be buying one of the best massage guns on the market that’s backed by a reputable company.

With the Hyperice Hypervolt, you’re not just buying quality, you’re buying peace of mind too. 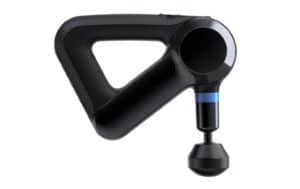